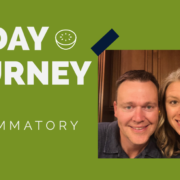 Join Chicago-area pediatric dietitian Betsy Hjelmgren and her husband, David, as they venture on their own nutrition journey this August. Their vlog contains all the laughs, fun banter and tips you would expect from a great couple attempting a restrictive diet rollercoaster. Tune in as Betsy learns to truly appreciate the difficulties clients and families face when embarking on a new diet with nothing but a few handouts and some encouragement from others!

I have a long list of aches and pain. The first significant issue began the last time I edited a chapter of the Nutrition Care Manual for the (formerly) American Dietetic Association, because I remember noticing after hours of sitting in the office chair at the old house, that it hurt. What exactly hurt? I wasn’t sure. But it was in the area of my lower back, right side, and sometimes it seemed to radiate to the hip. That was about 2009.

In 2008, my youngest child was born. Amidst a huge crisis of what I perceived as multiple near-death experiences, I developed an auto-immune bleeding disorder that first appeared when I was about 7 months pregnant, and led to me nearly bleeding out during delivery, and again three weeks later when the scare presumably came off the cauterized end of my uterine artery. Does that have anything to do with the aches and pains? Probably not. But after several weeks of steroids and several units of transfused donor blood, who knows.

Regardless. Fast-forward a year, and my lower right back and hip hurt.

That began a decision tree. It went like this (and usually still does): maybe I should take a break from running. No. Maybe I should see a doctor. No. Maybe it will get better on its own. I was young. Only 34. But time passed, and it didn’t get better. So eventually I saw my primary doctor. She ordered an x-ray, and diagnosed Degenerative Disc Disease – DDD – D3 – arthritis in the spine.

So I decided I would avoid movements that worsened the pain, but keep on with my everyday life, since there was nothing much that could be done about it.

Well, the pain slowly worsened. And time passed. One day in 2013, as I was driving around seeing patients, I noticed that I kept reclining my seat further and further in the car to straighten my hip. But nothing I did made it more comfortable. So finally, I set out to see a specialist about the lower right back pain. After an MRI, it was determined that my labrum (hip cartilage), was torn and needed to be repaired. So in May 2013, I had that hip scoped and repaired. And then I was 60% better. Not satisfied with that outcome, I found an amazing physical therapist and began also treating the DDD. By fall 2014, 1 1/2 years post-surgery, I felt pretty good.

I worked my way back into a rigorous exercise routine, running, lifting weights, taking classes at the gym. And I decided 3 years later that I wanted to run a marathon – something I had done in my 20’s, and swore to myself I would repeat. But as I increased running, other things began to hurt. So I decided, in 2018, I’d run a half-marathon instead and see how that went.

As 2018 began, I started training. I increased running mileage, kept doing classes at the gym and weights for strength. But in June, I started hurting again; now in the right elbow and left ankle. I saw OT and PT. Had therapy for tendinitis in the ankle and elbow both, and began improving. But it wasn’t enough. So I pulled out of the half-marathon plan 6 weeks before the race, cut back on running to rest the ankle, and quit the classes at the gym and my beloved Jillian Michales DVD workouts.

Slow as molasses, the tendinitis improved. I began lifting some free weights again, using much lighter weights. One day in April 2019, I woke up and my shoulder hurt like hell. I could barely tolerate my arm hanging freely at my side. I waited two weeks to see if it would improve, but when the pain began keeping me up at night, I called a specialist. He diagnosed synovitis – inflammation of the joint fluid in my shoulder. He prescribed steroids, which made me feel better everywhere! For 10 days. But once they were out of my system, the pain returned. Plus new pain – tendinitis in the other elbow.

A friend suggested maybe I had low pain tolerance. However, seeing that I’d given birth to a 9 pound baby three hours after the epidural wore off, I assured him I had a grasp on pain and its severity.

And I do have a strong family history of arthritis.

But I was having inflammation everywhere, chronically, in new places and often after no apparent cause.

Something had to change.

Now I admit, I’m a health nut. I’ve been a dietitian for 20 years, and I live and breathe healthy eating and exercise. So what was I doing wrong?

What seemed to be a common thread here is that diets high in fruits and vegetables , which limit or eliminate processed foods, tend to produce healthy results. And as David says, where there’s smoke, there’s fire.

So based on some of the current studies on diet and inflammation, it struck me. I’m the perfect candidate to try this. But I didn’t want to.

David had been talking about his own aches and pains, as well as his rising BMI. And he was debating if he was going to make some dietary changes.

So one day, driving home from a visit to the lake in Wisconsin, I said to him “I have an idea” and presented this proposal: “Let’s go for one month start to finish, avoiding inflammatory foods and adding anti-inflammatory foods.” He said “Let me think about that.” And four hours later, it was on.

Based on what I was reading, I made some guidelines:

Some things were particularly difficult, including:

But we learned that even though we generally eat pretty healthy – or so we thought – there are added sweeteners and sugars in everything! And omega-6 rich oils, that I assumed were okay because they weren’t saturated fats – were also EVERYWHERE! Even things that I had previously counted as healthy were no longer options, such as Triscuits, Raisin Bran and fruited Greek yogurts.

So here’s what happened. Within the first couple weeks, nothing. But I did notice that my skin looked nice. I also noticed that digestively, I felt great. No reflux, no constipation, no indigestion. But other that that, it was a lot of work for not a lot of results. But by the 3rd week, I noticed that my aches and pains were decreasing. And by the end of the month, my pain was about 80% reduced, especially in arthritic places. However, considering the amount of effort required to get to feeling 80% better, I started thinking – how much wiggle room is there to eat more freely, but still see results?

I don’t know where that line is.

So, tomorrow we will begin making some slow additions. For me, I am adding back sprouted grain bread and whole wheat pasta first. I need something for my peanut butter, and a way to carbo load before a big run.

I am continuing to avoid added sugar and sweeteners, but I will allow myself to have dessert once a week because, well, I love ice cream and I want that pleasure.

Red meat? I don’t really care about it. I will eat it if someone serves it, but I don’t plan to really go out of my way for it.

Refined white flour and the omega-6 oils are out for good.

And why not continue the supplements? That’s easy.

So we will report back to you. In a month. And then continue to periodically bring you updates.

Thank you for your support and encouragement! It has been a valuable experience.

Send your anti-inflammatory diet or any pediatric nutrition questions or comments our way! Let’s chat!