Betsy and Jen discuss their personal and family experience with reflux, as well as tips for management by diet. What foods and what timing affects symptoms? What makes reflux more tolerable? if you’ve struggled with the annoying problem, tune in for tips and ideas!

Jen and Betsy are very excited to share this informative and eye opening interview with Dr. Vince Biank, pediatric gastoenterologist at North Shore University Health System! Listen in to hear about reflux disease, and eosinophilic esophagitis, an uncommon allergic condition that can’t be picked up during typical allergy testing. Not to be missed for anyone who’s child has struggled with reflux, difficulty swallowing, poor growth, and environmental allergies.

Starbucks, energy drinks, sodas, juices…what’s a parent to do? Betsy and Jen return to the scene with their lively banter, focused on what and how much kids should be drinking. Is juice really that bad? When are sports drinks relevant? Listen in to see who drinks more water between our hosts; and whose kids are better fluid drinkers?

After a few months of dealing with a colicky baby, I am so excited to be back from my second maternity leave! My first maternity leave was nowhere near long enough. I swear, I feel this time around, it was too long.

My first baby was a breeze. Great sleeper, great eater, and most importantly, I could put him down in his bassinet, or boppy newborn lounger and get my “stuff” done. I was able to shower, work out, cook, clean, organize my house and have a social life. This time around could not be any more different. I cannot put my baby down without hearing an instant shriek. She is in my arms from the moment she wakes up, to the moment she goes to sleep for the night.

Around the time she turned two months old, I began frantically searching the Internet for ways to soothe her so I would be able to put her down without crying. Luckily, we at Feed To Succeed, have an amazing group of dietitians that have turned into a wonderful group of friends. So while I was searching these soothing techniques, I received a group text about a study that was released showing that probiotics supplementation in breastfed infants help with colicky behaviors. I was so excited about this, that I drove to the office at 10PM on New Year’s Eve to pick up probiotic samples.

It has been six weeks of routinely using probiotic samples, and it has been great! It’s as if someone reprogramed my baby to reduce fussiness and increase happiness. Having such a great experience made me curious, so I began reading the research that the other dietitians and Feed To Succeed told me about. Was this just a coincidence?

After reading through a research article and a meta analysis of probiotic supplementation in colicky infants, it became clear this was not just a coincidence or placebo effect. The meta analysis looked at studies out of Italy, Poland, Australia and Canada. They looked at average minutes of crying and/or fussiness per day with each infant. In their analysis, they concluded that Probiotics are “…effective and can be recommended for breastfed infants with colic.” This conclusion was drawn after combing through four individual studies (in the countries outlined above) and seeing the average minutes of crying and/or fussiness significantly decreasing with probiotic supplementation.

There is still a lot unknown about colicky infants, but probiotic supplementation can help. There are so many different probiotic supplementations out there, and it can be very confusing. The two specific strains that were included in these studies are Lctobacillus reutri 1, and Bifidobacterium longum infantitis 2. Other strains may also help, but these are the two strains backed by research.

From one tired “powered by coffee” mama to another, it might be time to give probiotics a shot! Your baby may just need for healthy bacteria in their gastrointestinal tract and they might just be the thing your looking for.

This article is based on the following studies:

Smita Joshi, guest expert in feeding difficulties, joins Betsy and Jen for an in-depth and helpful discussion about strategies for getting kids to eat things they don’t want to eat. Engaging and informative talk. One of the best yet!

If there’s any mom out there who enjoys making lunches, I’d like to meet her.

And then I won’t believe her.

Here’s how lunch making goes down in most houses:

And here’s the one simple trick to make lunches this school year better:

1. Buy bento boxes. If you don’t know what these are, you must find out. You can make one yourself out of tupperware or buy a big fancy one. They are all over stores like Marshall’s, TJ Maxx or World Market for about $5.
2. Buy silicon baking cups to store goodies inside the bento boxes. Six for $2.49.
3. Pack REAL FOOD (read no more packaged, expensive junk), out of a bento box (aka a dish) so that your kids will eat lunch from plates and not mushy baggies.
4. If all goes well, your kids will actually eat the foods that they normally like at home from their lunch boxes.

With Halloween right around the corner, treats and candy are everywhere! Trick-or-treating, Halloween parties and even bowls of candy for customers while shopping leads to an excess of candy in tummies and drawers at home. Try these tips to manage the treats.

The key to eating healthy is eating food that tastes good. From the youngest of babies, we learn that food that 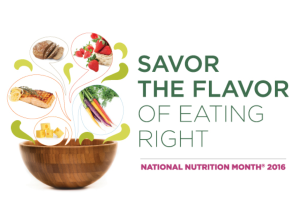 doesn’t taste good isn’t worth swallowing. Whenever we work with clients, regardless of the issue, we focus on eating a diet of food that the child and family can enjoy. That’s why I think this month’s National Nutrition Month theme: Savor the Flavor of Eating Right is spot on.

To start off the party of National Nutrition Month this March, I present an awesome “savor the flavor” recipe that you can flavor yourself! Chickpeas–garbanzo beans–call them what you will, taste lovely in a salad or even on their own. But to roast them with spices is divine. Try this recipe that only takes moments to prepare, and you’ll see what I mean. I suggest sharing them with your family or a friend, otherwise, you’re likely to eat the whole batch.

Heat oven to 350 degrees. Mix spices in a bowl with olive oil. Add drained chickpeas and stir until thoroughly combined. Spread out on a baking sheet and bake for 30 minutes. Enjoy warm. You can also add them to a salad. 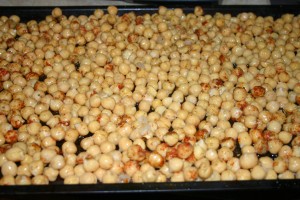 National Nutrition Month® is a nutrition education and information campaign created annually in March by the Academy of Nutrition and Dietetics. The campaign focuses attention on the importance of making informed food choices and developing sound eating and physical activity habits. In addition, National Nutrition Month® promotes the Academy and its members to the public and the media as the most valuable and credible source of timely, scientifically-based food and nutrition information.

Recently Hannah, the parent of one of my clients, reached out to me on Facebook to post a photo of her son, Ian, dressed in skinny jeans for school. It was a simple gesture on Hannah’s part, and I couldn’t help but share in her joy. For months I’ve worked with Ian and his family to help him make some changes to his diet, but in truth, it is Ian who has done all the work. I am so proud of the perseverance and self-confidence this 12-year-old exudes and am pretty sure that others can be inspired by his story.

Nearly a year ago, Ian came to me after his pediatrician expressed some concern about his weight. We spent that first session together just talking and in some follow up sessions we came up with ideas on how Ian could adjust his diet. It’s not easy for anyone to adjust their diet, especially a growing, 12-year-old boy. Ultimately for Ian, it meant giving up refined carbohydrates.

Looking back, Ian says that at first it was hard to give up some of his favorite foods, like bagels and pasta, but then it became a lifestyle and was easier. He learned how “to move around the carbs” but still eat a lot of the food he enjoyed before in smaller portions or in a healthier, whole grain version. For school lunches, he always brings his from home. He’ll roll up meat and cheese so he doesn’t need the bread. After school, he’ll snack on an apple. For dinners, Ian’s family stopped having pasta and fast food and started cooking a lot more to accommodate his diet.

In the end, Ian has lost 20 pounds, and his BMI has dropped from 30.5 to 25.1 (and he continues to grow taller!). What matters most to him, though, is that he shaved 30 seconds of his long distance swim times during swim meets. He also has more energy throughout the day. He can enjoy some carbs now, especially before a swim meet.

Hannah says that Ian was able to succeed because he never felt pushed into any diet regiment. In the first few months there were ups and downs, but Ian knew that change was ultimately up to him. He was able to ease into the changes he has made and eventually succeed. Additionally, says Hannah, the whole family is now more aware of what they are eating, and they keep healthier food in the house because of it.

Looking back, Ian says, “It’s hard in the beginning, but there are results.”

That’s wisdom we can all use.

I saw a recent New York Times post on roasted cauliflower (looks amazing, by the way!), with the advice to cook more, instead of trying to eat less for 2016. I couldn’t agree more. With mid-January already on its way, many of us by now have given up on unrealistic New Year’s resolutions. Cooking, though, is always a goal. Every time you accomplish the feat of putting a healthy meal on the table for your family, the next day of starting over again is right around the corner. Sometimes we make cooking a daily habit…and other times we get busy and distracted.

Those times that we make sure to cook at home are when we are eating best–physically and emotionally. Eating homemade meals as a family ensures that we are eating real food, connecting with one another and modeling healthy eating habits for our kids.

So, if you’re like me, you’re hoping to cook more dinners in 2016, despite the work, carpools, homework, sports and appointments that come our way. And because it’s my job, I’ll even offer a great tip for ensuring we all put a real meal on the table most nights: prep ahead! Chop a ton of veggies on a Sunday and put it in a bag in the fridge. Better yet, have your kids do it. You can take it a step further by putting all those veggies on a tray to roast. Drizzle some olive oil and a sprinkle of salt and pepper over it, and then roast it for 45 minutes on 375 degrees. Cook a huge pot of brown rice to go with it, and you’ve got the base of several dinners. You can turn those goods into stir fry, chili, stew or even burritos. With a little organization and effort early in the week, we’ll all be coming home to a fridge full of grub during the week.